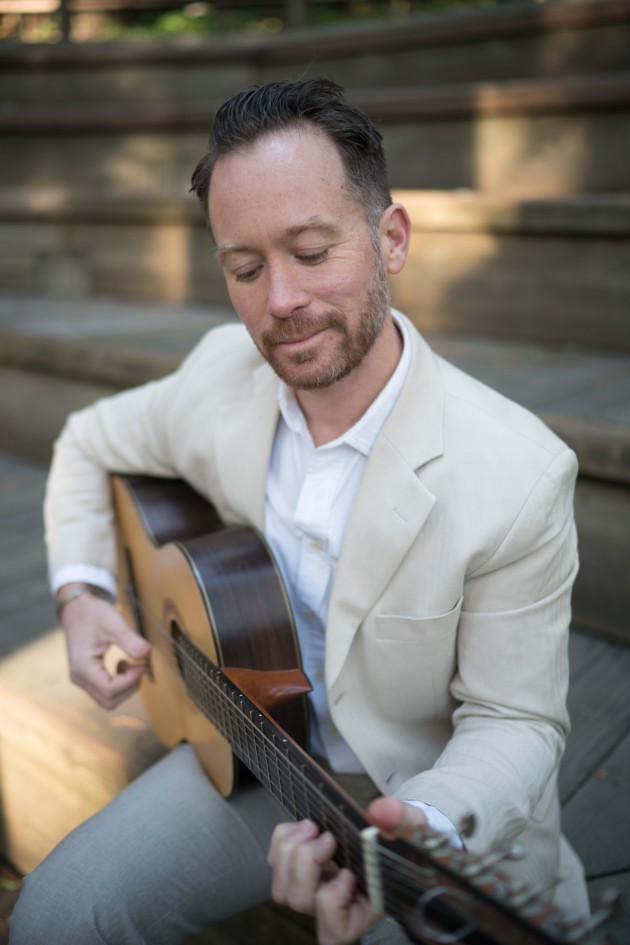 “I have been very impressed by Brian’s creativity and versatility. I look forward to hearing his future music projects and look to him to redefine and extend the boundaries of jazz guitar”
— Bruce Forman, Concord recording artist and internationally renowned Jazz guitarist

"Moran’s 7-string guitar serves as the connecting voice between all the group’s players, nailing the bass foundation beneath the group and holding the form together with powerful runs. Grupo Falso Baiano sends a powerful message with their performance on Viajando: Choro e Jazz, showing us the massive possibilities inherent in Brazilian music when we dig a little deeper - something that this group has done with truly inspiring results.";
— The Latin Jazz Corner Blog

“Moran is an extremely tasteful electric player, who simply knows how to use the textures (and the history) of his instrument (including that extra low string for some serious rumble). He also displays a nimble swinging technique on his own 'Ring around the Collar'.”
— Cadence Magazine

“In the hands of any lesser an arranger, this piece would have died an early death - but here and in Moran's hands the music soars with the beauty of a rainbow (regarding Brian's arrangement of The Partisan).
Special mention must be made of Ring Around The Collar(Brian's composition from Blowout's debut album The Supporting Theory). This swinger leaps out of the speakers and shows Moran to be a soloist who portends great things.”
— Jazz Review.com

“Most memorable for me is the wonderful guitar solo by Moran on Solid Brass Numchuk (from Blowout's The Supporting Theory).
— EuroClubDeJazz.com

Equally at home in both jazz and latin guitar styles, Brian Moran is one of the Bay Area's more versatile and accomplished musicians. Since graduating from Berklee College of Music in 1998, Brian has made the San Francisco Bay Area his home, where he maintains an active performance and teaching schedule.

Brian began his study of the guitar in 1987, beginning with rock guitar, and later focused exclusively on jazz for 10 years, in which time he led the Blowout Sextet, composing and performing original music and releasing the CD "The Supporting Theory" to rave reviews. Since 2001, Brian has dedicated much of his time to the study of 7 string jazz guitar, Spanish and Brazilian guitar, Brazilian cavaquinho and bandolim; and includes classical, Brazilian music, and flamenco in his diverse repertoire. He was nominated as a "Latin Jazz Guitarist of the Year" in 2011 by Latin Jazz Corner. He is a founding member of the Bay Area's "Grupo Falso Baiano", a project dedicated to Brazilian choro and samba music.

He has traveled to Spain and Brazil three times studying with Choro Rasgado guitarist Alessandro Penezzi and Marco Bertaglia, author of O Violao de 7 Cordas. In Feb of 2007 and Feb of 2008, Brian attended the 3rd and 4th annual Festival Nacional do Choro in Sao Paulo state, where he studied with some of  the top choro musicians from Rio and Sao Paulo, including Mauricio Carrilho, Luciana Rabello, Pedro Amorim and more.

Brian was a 2014 and 2017 faculty member of The California Brazil Camp, a 2012 faculty member at JazzCamp West, and has been a faculty member of Oakland Feather River Camp since 2016. He has given workshops at the South Bay Guitar Society's annual Guitar Festivals on the subject of Brazilian choro guitar styles, and has taught choro ensemble classes and workshops at the JazzSchool in Berkeley CA. Grupo Falso Baiano — the choro ensemble he co-founded — was twice awarded a grants by the San Francisco Friends of Chamber Music to help produce their second CD Simplicidade: Live at Yoshi's and 3rd CD Depois

Brian is the lead instructor for the new instructional website StrumSchool, which focuses on teaching guitar to absolute beginners. It features videos, articles, blogs, and more. He also has content on the subject of choro guitar at RiffTime.

He has lent his talents as a recording artist to many projects, produced music for the openings of photographers Annie Liebowitz, Ruth Bernhard, painter Robert Bechtle, performed at the San Francisco, San Jose, and Healdburg Jazz Festivals, SFJAZZ, SFMOMA, LACMA, appeared on television and in theatre, and has composed and conducted for numerous other projects including The Alamo, and The Dallas Museum of Art. Bruce Forman calls him a "thorough musician who has spent a great deal of time assimilating the wealth of Jazz history and has found a wonderfully personal way of expressing himself".

He currently plays with Grupo Falso Baiano, Oakland Samba Revue, Jorge Alabe and Grupo Samba Rio, and as a leader and sideman in various other jazz, blues, and world music groups.